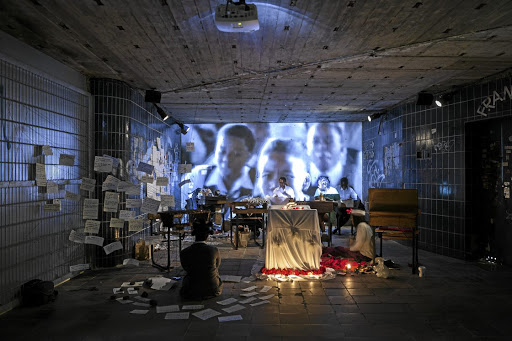 Lessons: South African avant-garde art collective iQhiya is showing its installation, featuring the 1967 film To Sir, With Love, at the 2017 edition of Documenta in Kassel, Germany. The art expo, which was founded after the Second World War, features more than 160 artists from around the world
Image: Supplied

Dark and dingy, it is barely possible to make sense of the bits of paper among the old-fashioned school desks, dull lighting and loops of video that play out the rebellion scenes of the classic 1967 film To Sir, With Love, starring Sidney Poitier.

The art installation is entitled Monday and it is clear that vibrant human presence contributed to the chaotic leftovers of a performance. It’s noisy and rough. It was made by iQhiya (Xhosa for doek) in a run-down part of the old railway station in the German city of Kassel.

One of SA’s avant-garde female activist art collectives, iQhiya is among the more than 160 artists from around the world who have gathered since June for the 14th version of the world’s leading cutting-edge art expo. More than 30 venues and outdoor spaces have been occupied for the traditional 100 days of the event.

Documenta was founded in the aftermath of the physical and cultural devastation of Kassel during the Second World War. The belief that the new in art and creative invention is a dynamic humanist imperative has been its fundamental driving force.

But since the early 1990s, when a grand new train station opened on the outskirts of the city, the authorities proclaimed it a KulturBahnhof (culture station), as it featured in all the Documenta expos.

iQhiya’s installation welcomes visitors to Documenta 14 as they alight from the connecting shuttle from the new station at Wilhelmshöhe.

"We offer an alternative curriculum, defying the structural injustices [lessons] of the hidden one we uncover in our various [educational] experiences," says member Thuli Gamedze.

The reference is to a "hidden agenda" education theory of the 1920s, but the link to the 50-year-old teacher-pupil movie is strongly striking and emotive.

In Athens, where Documenta 14 had been previewed since April, iQhiya did a reprise of its performance piece The Portrait. An endurance performance, it "speaks to the role forced upon black women in society, referencing the tensions between suffering and violence".

Issues of global discord, a restive world, homelessness, displacement, the plight of refugees and concerns about divided or split communities are the themes and drivers of the creative industry reflected at Documenta 14.

On the eve of Turbine Art Fair 2017, we asked curators, educators and gallery owners to select their favorite artists and artworks on exhibition at ...
Art & Design
4 years ago

The link with Greece and the presence of numerous Greek artists are symbolic, significant and potent.

The reach of artists and art is particularly wide, with the proviso that most names will not ring the happy-recognition bells for high-status art dealers or wealthy collectors.

This is neither a high price-tag art fair nor a party gathering for owners of yachts and collectors. This is not Basel, Miami, Frieze or La Biennale Venezia. Documenta 14 is about art with resolve, not entertainment — art that faces the issues of our time head on.

Being a polished First World project in a location in which inherited guilt easily bubbles up, matters of representation beyond and outside of western predication — of whose art it is or should be — came to the fore in recent decades.

The "decolonisation" mantra in South African cultural circles confronted Documenta and it is dealing with it.

This time around, one gets the impression of a confident, bright debate — with the past, with the rest of the world, with the uncertain future. Curatorially, spread out and as diverse as the art is, there is an idea of a completeness, of suss. There is art from all over the world on its own terms.

Nothing signifies this more poignantly than another remarkable South African presence. Finding comfortable company among the new are 10 wondrous pictures.

Mancoba spent most of his creative life in Paris and was recognised in SA only towards the end of his life. A modernist in the true sense of the word and yet deeply anchored in his African connection, his gentle abstract gestures are a quiet moving presence in the formal Documenta Halle.

The works make a statement about the endurance of the modern — some pictures date from decades ago — and art’s spiritual inspiration.

If anything puts the "decolonising art" debate to bed, this is it.

Durban-born Tracy Rose has also been a fierce proponent of black feminist art endeavours. The title of one of her rather loopy videos, Cleopatra was a Black Bitch, on view in a back room of the gorgeous Neue Neue Gallerie, sums up the aggro of her "rough ride" style.

Less obvious but heady is James Webb’s commissioned contribution to the radio programme series Every Time A Ear Di Soun: War of the Worlds.

Kendell Geers’s 2004 piece Acropolis Redux (The Director’s Cut) is a menacing, jail-like construct of razor wire and shelves in the Fridericianum.

This building, Europe’s first museum, houses for this period a major exchange of art in the collection of the Athenian modern art museum, the EMST.

A perfect counterfoil to the terrifying Geers installation is Iraqi artist Hiwa K’s When We Were Exhaling Images, a construction of human-size commercial pipes outfitted with "survival" equipment. It is an oddly moving testimonial to the plight of refugees.

But it is on the city’s old central point, the Königsplatz, where the most powerful statement about this, one of the event’s central themes, stands 16m tall: the Nigerian-born artist Olu Oguibe’s commissioned obelisk. In gold letters against the stark concrete, the text reads "I was a stranger and you took me in" in English, Turkish, German and Arabic.

The bit parts of Documenta 14 all over the city comprise art that cleverly interacts with the past (the great stuff in the existing museums), confronts the present (sometimes quite aggressively) and alludes to suggestions about the way forward.

This Documenta is reclaiming the articulate and persuasive political voice for and of art in an unstable world.

This is not art for amusement, but for contemplation and for action.

It is not art with which collectors can brag about their wealth, but art to even challenge their neoliberal notions.

It reflects the faultline of the haves and have-nots — and a crisis of cultural confidence that has the world in a tight grip.

The 2017 Documenta 14 carries the powerful message of art’s authority to communicate in all, and the most extreme of, humanist matters.