Bloemfontein-born sculptor Atang Tshikare is one of the designers heading to Design Miami with Southern Guild at the end of November. Here’s a taste of what they’ll be showcasing alongside the world’s leading design galleries 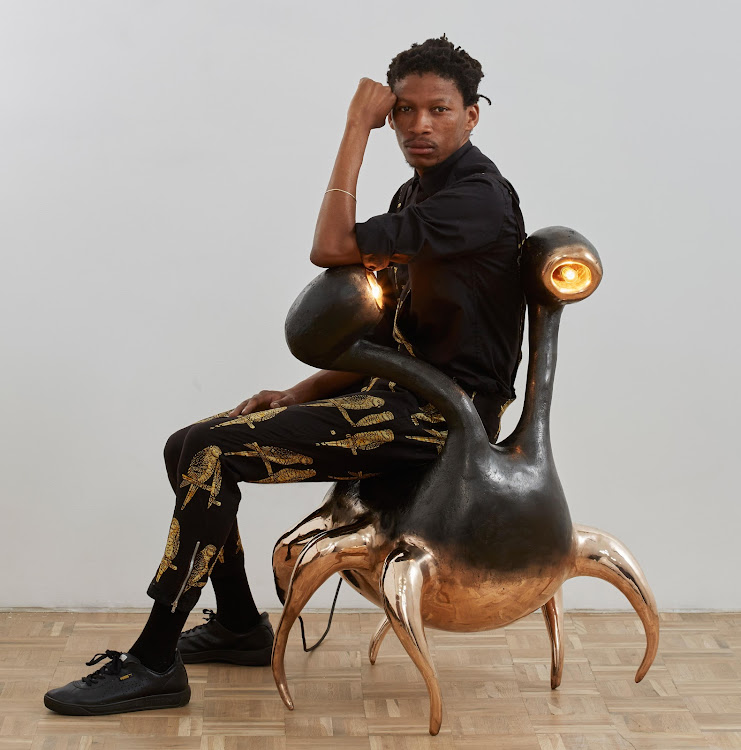 Well the future is here and Tshikare’s bags are packed as he and a group of South African designers make their way to one of the most famous design exhibitions in the world.

This is the fourth outing for Southern Guild at Miami and we have no doubt the Southern Guild exhibition is going to measure up, if not exceed, the international standards.

According to Southern Guild, the work they will be showing is “a future-primal take on collectible design”.

“Seemingly untamed, these pieces are at once wild at heart, and yet elegant and sophisticated. A carcass reimagined as a bronze chandelier, fantasy creatures appearing as functional accessories, animal-form nesting environments and tables referencing thorny landscapes make for an Afrofuturistic identity that harks back to elemental instinct,” say the show notes.
We’re prepared to bet Miami is going to be blown away. southernguild.co.za 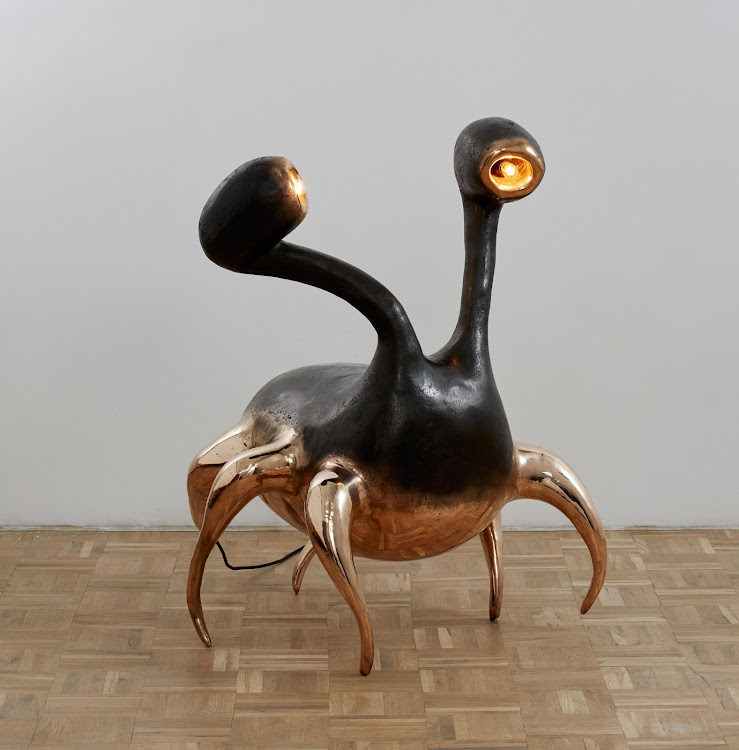 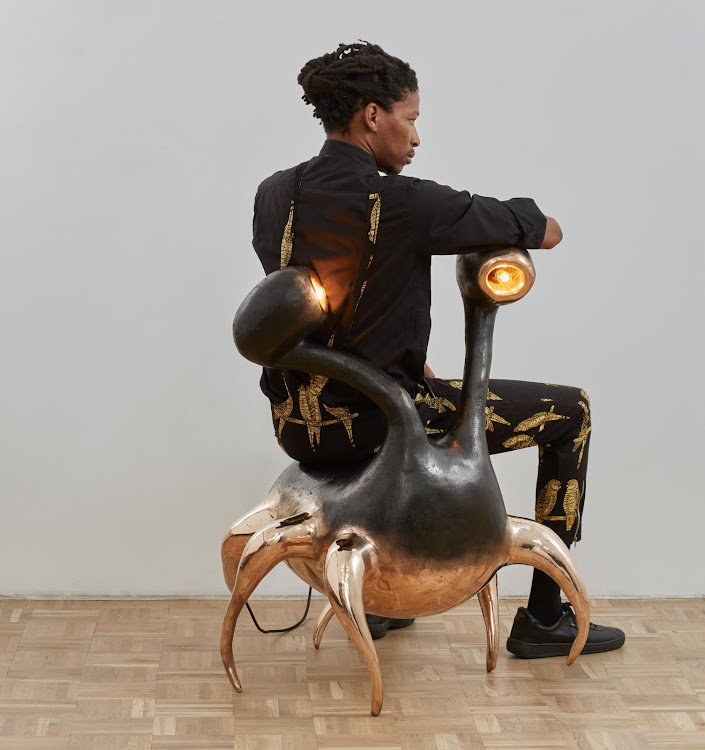 LE BONE LEBONE (YOU HAVE SEEN THE LIGHT)

Atang Tshikare shares the legend that inspired his giraffe-like creation:

During ancient times, in the Southern parts of what is now known as Africa, there lived a Shaman. He had a habit of wandering the terrain and had no particular place that he called home. His home was where his two pets (creatures) were. These two animals did not like to be in one place for too long and their master always had to have them on a leash when he slept or went into a trance. Thus, the Shaman and his two creatures never stayed in one place for more than two consecutive sunsets, and if by some miracle they ever did do that, they would definitely be gone by third sunrise.

When asked about his wondering ways, he would respond by saying that his creatures were in search of something and he had to keep them company and protect them from harm during their ongoing exploration. He would say that he was a servant to his two creatures as he served them and they did nothing much for him except keep him on his toes and always on the move. He also said that he did not know his next move until it happened because he was always following their tune, which always remained in sync. After wandering the region for more than two decades, the wandering man noticed that his creatures’ need to keep moving started to slow down when they got to a place in between two largest rivers in the area. This place had an ocean as well as a large mountainous terrain with exotic wild flowers and other species including some strikingly beautiful animals and hot springs that produced a range of beautiful natural scents depending on the time of day. After arriving in a particular valley and staying for more than two sunsets, the wondering man noticed that his creatures did not want to leave. On the third evening when he went to sleep, he did not use the leash that he usually put around their necks.

The next morning when he woke up, his creatures were nowhere to be found, but he did not have any sense of urgency, sadness, despair or anxiety about their absence. Instead he felt this incredibly strong and gentle peaceful force from within himself. He accepted the fact that the invisible force was going to direct him in a similar manner to the way his creatures always guided him. He walked towards a place close to a river on the east side of the valley. As he was going past a forest and a waterfall, he felt a lovely sense of calmness that he had never felt before during his entire existence. He stood still for a few moments to listen to the sounds from the waterfall and the river which were combined with other sounds made by the trees, wind, birds and other creatures. He felt a strong urge to look up and saw a bright light above the trees. This light was so salient that it swallowed the rays of the sun rise which he had noticed a little earlier. He started walking towards the direction of the light which was to the south of the forest. As he was getting closer to what he believed to be the source of the majestic light, he could feel his two creature’s energies all around him. They were so relaxed, at peace and with a sense of belonging. He called for them but they did not come and he had to keep walking towards the light. As he got to a large clearing, he saw the source of the light and around it, were these uniquely and most beautiful looking creatures that all welcomed him with strange yet familiar voices. He realized that his two masters had found what they had been searching for all along and everyone around was in a chanting ritual to welcome them home. They were in the middle of the circle and surrounded by the other creatures with similar and different features.

The creatures all had two, three or more eyes. Some also had no eyes but they were all radiating a light from their faces where the eyes are normally located. All the creatures’ eyes including his own were staring at the huge light from the one eyed giraffe-like creature which was much bigger than the rest of them in size. They invited him to the middle of the circle and he saw just how happy and relaxed, yet excited, they were to see him.

He wanted to communicate about the big and tall giraffe-like creature with one eye that was the source to the huge light. As the force within him got even stronger he realized that the light from the giraffe-like creature was the same force that he felt from within as he woke up earlier that morning and that it had been the same source that kept his creatures wondering for so many years in search of it. He too started to feel very much at home and knew that his wondering ways were over. After the chanting ceremony finished, a female being that looked like a vibrant and younger version of his late mother came and took his hand and placed some sweet exotic fruits in his mouth and she said “Le bone Lebone.”  (You have seen the light/you have been enlightened) to him and his creatures in a seductive and inviting voice.  As he finished eating the sweetest and juicy fruits he had ever tasted in his life, he turned around to look for his creatures’ expressions. They were both embracing two other creatures that looked almost identical to them; the only difference was that they were their male and female counterparts too. He smiled at them and back at the woman and took a deep breath and shouted to them “Le bone Lebone?” (“Have you seen the light?”) The majestic giraffe-like creature responded in a deep and commanding human like voice and said “LEBONE IS MY NAME AND THIS IS MY HOME AND I WELCOME YOU HOME WONDERING ONES AND YOUR SERVANT”. 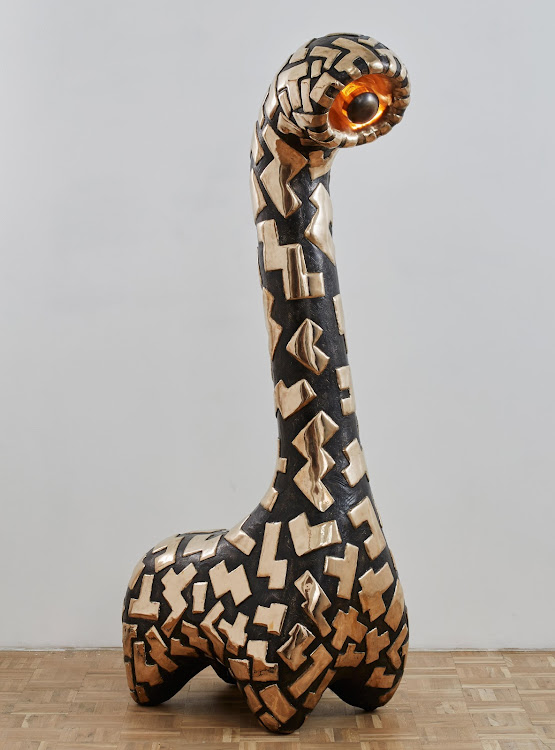 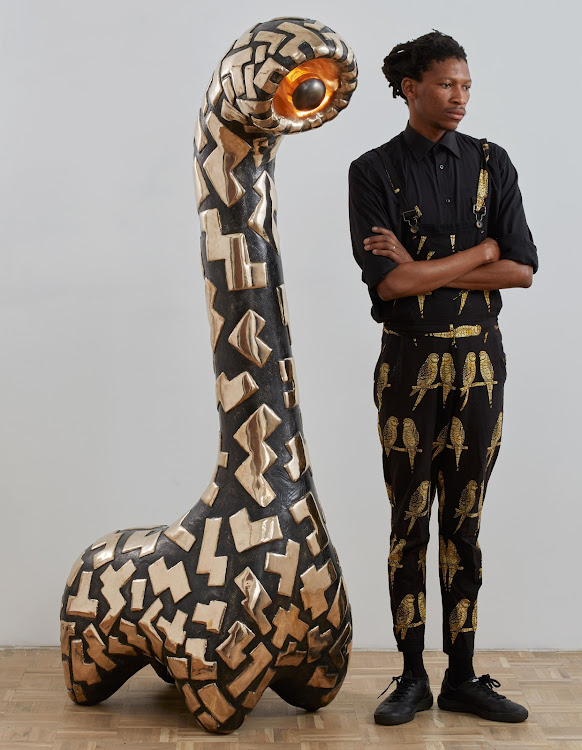